A single Atomic Host is a fine place to run your containers, but these hosts are much more fun when bunched into clusters, a task that we can manage with the help of Kubernetes.

There are a lot of great guides for setting up a kubernetes cluster, but my favorite involves ansible and vagrant, and lives in the kubernetes contrib repository on Github.

This install method can be used with the libvirt, virtualbox or openstack vagrant providers. You can also use the ansible scripts on their own, if vagrant isn’t your thing.

To follow along, you’ll need a machine with vagrant and a provider for libvirt, virtualbox, or openstack. I typically use libvirt on Fedora, but I’ve had success with virtualbox on Fedora as well – if someone wants to test this with virtualbox and Windows or OS X, please let me know if it works.

I’m using Fedora 23, and this command pulled in the specific dependencies I needed:

For Fedora 22, which ships with an older version of vagrant (1.7.2), and for CentOS 7, which doesn’t have vagrant in its software repositories, you’ll need to install vagrant from the upstream package. And run vagrant plugin install vagrant-libvirt to get the libvirt provider.

The way that this Vagrantfile is currently written, you’re required to have the vagrant-openstack-provider installed, whether you’re using it or not, so either install it:

One of the nice things about this method of bringing up a kubernetes cluster is that it configures the set of kubernetes addons, which includes DNS support. However, a major open issue with the DNS addon (and at least some of the others) is the way that it conflicts with SELinux. The ansible scripts take care of putting SELinux into permissive mode – a workaround I hope won’t be required for too long.

I made a fork of the kubernetes contrib repo with a small set of changes to make atomic hosts work.

Grab my fork by git cloning it or by downloading the zip archive:

Bring up the cluster

We’ll use vagrant to bring up our kube-master and kube-nodes. The default number of nodes is 2, but you can change this by setting a different env variable for NUM_NODES.

If your Atomic Host image needs updating, you can do it before provisioning, like this:

Time to configure kubernetes, by running the ansible playbook on the kube-master:

Kubernetes should be all set up now.

I typically test out my kubernetes clusters by running the upstream project’s guestbook-go sample application, which features a simple front end app that runs across multiple hosts, and a redis-based backend that divides its work between a master node and a few slave nodes. I’ve packaged guestbook-go into an Atomicapp for ease of deployment:

Once the app is up and running, which you can discern by watching kubectl get pods, you can figure out the IP and port on which to access the app in your browser: 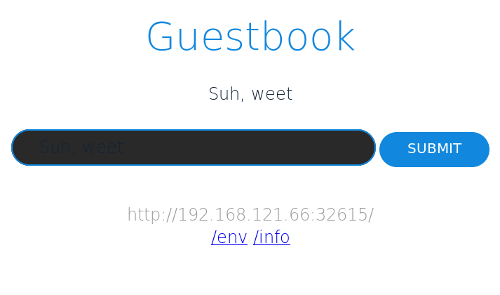 I’m keen to see / help realize a fix for running SELinux in enforcing mode. Also, I’m working on getting my atomic-friendly changes merged upstream, so we won’t need to mess with a fork.